At the end of the 90-ties we were some nurses at the Urologic Clinic, Huddinge Hospital, Stockholm that saw the need for a tool for graduation of macroscopic haematuri.

Already at an early stage we realized the advantages of using a standardized instrument to eliminate care givers and patients subjective graduation of haematuri. We also saw the need to document haematuri in patient journals in a uniform and professional way. Doing so it would be possible to note any changes in the degree heamturi over time.

A research on the market gave no indication that such an instrument existed. The idea of a first prototype, that we called Hemostick, began to form.

In collaboration with the Karolinska Institute, Stockholm we then began to develop and design a standardized measuring instrument. By collecting fresh haematuri, containing different degrees of blood inside, we counted red corpuscles and measured the permeability of the haematuri by means of a spectrophotometer. We put the red colour of the haematuri in relation to the loss of hemoglobin per liter urine and could in that way secure the quality of Hemostick.

New guidelines have been elaborated together with Urologists to, in a methodical and patient secure way, handle haematuri. Those guidelines can be viewed in Vårdhandboken (in Swedish only) The Handbook for Healthcare based on the Swedish Health and Medical Service Act (HSL) and Social Services Act (SOL) 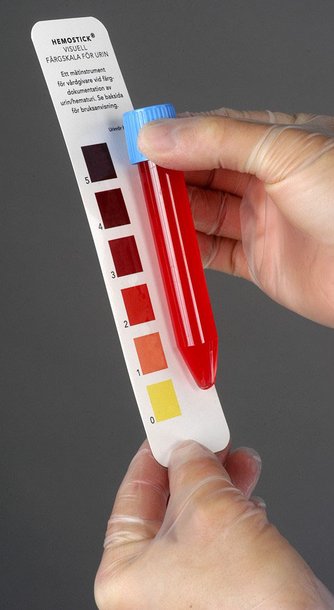 A test tube with urine is compared with the color